Get to know one of our exceptional club members every month! We appreciate ALL of our members, but want to shine the spotlight on Carley Allison this month for her hard work and dedication to our club! 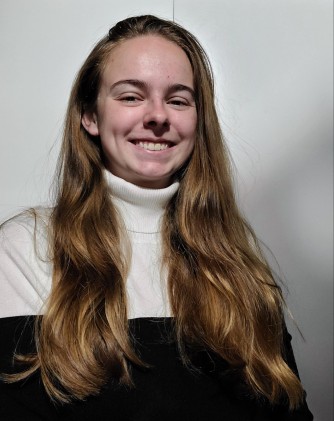 Carley Allison was raised in a small town called Addison, MI, which is just south of Jackson, MI. She was an active member of 4H and participated in several science fairs in both high and middle school, which helped her develop a passion for the environment and engineering. 4H also helped her develop a love for shooting sports and has participated in rifle and shotgun competitions. When it came time for college, she looked at several colleges with her engineering program and shooting sports program, but she always knew she would go to MSU, just like her parents and grandfather did.

She has been a very active member of the club since she’s joined. She went to almost every team meeting and sometimes went to Demmer outside of team hours just to practice because she loves shooting so much. Since she joined the team with five years of experience, she was able to help her teammates become better shooters. She has been to multiple regional matches and two national matches. During her second year on the team, she served as the Rifle Vice President, and for her third year she is serving as the Secretary.

Outside of the shooting team, she has multiple extra-curriculars. She is a member of Women in Engineering, Society of Women Engineers, the Environmental Engineering Society, Chi Epsilon National Honor Society, and the Soil and Water Conservation Society. She works for MSU’s Biosystems and Agricultural Engineering department and with MSU’s Institute of Water Research as a student researcher collecting water and soil samples and monitoring data. She is also a volunteer for the Women in Engineering mentoring program, which pairs upperclassmen with female freshmen engineers. In her free time, she enjoys fishing, reading, playing Minecraft, gardening, watching movies and TV shows, and knitting. She is incredibly proud to be a student at MSU and member of the MSUSSC.